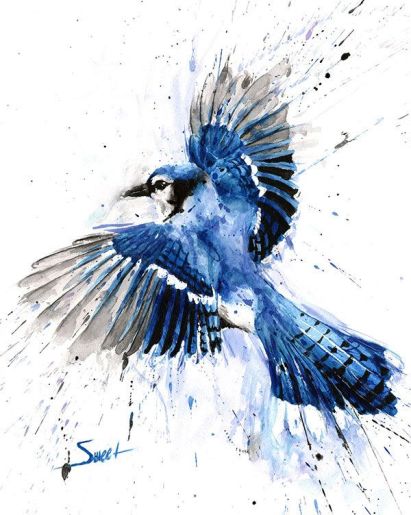 woodland breathes in the rain

in the crook of a favorite bough

where he ponders his lucky longevity

wondering how in the hell

he alone has escaped all these years

from the red hawk the raven

the horn headed owl those raptors

who rule this perimeter forest

it’s not that he hasn’t had countless

encounters but every attack did he

meet and repel with a counterattack

of his own after all he has always

been fearless if never quite neighborly

small as he is he has arrogance large

with fierce pride not to mention

a devious larcenous heart and this

him to plan his next raids on the

who squawks as he flicks with an

insolent shake of his flamboyant

an ill-mannered attitude rude to the

gifts of the season and churlish

toward time more than happy to rest

on the cool smug assumption that

all said and done he is simply too damned

fucking mean to be anyone’s prey

when the time comes he’ll drop from

his perch no one’s victim his blue

feathers splayed on the ground

daring God and His creatures to

try and avoid the conclusion

that his was a life self-determined

free from all notions of conscience

From my books Small Noise and Legacies (vol. 2)

Sometimes everything has to be enscribed across the heavens so you can find the one line already written inside you. Sometimes it takes a great sky to find that small, bright, and indescribable wedge of freedom in your own heart. David Whyte

Words in the Light